THE COLORS OF LIFE

Note: There are numerous images and animations contained on this page, which may result in longer downloads.  All SeaWiFS visualization courtesy:  NASA/GSFC and ORBIMAGE

Everything about life on Earth depends on life in the ocean. After all, this is a blue planet, with about 70 percent of the total surface awash with one of the most common molecular compounds known: water.

The oceans regulate the planet's biological well being. But water alone is not enough. Life in its most common forms demands a ready supply of a particular element if it's to thrive: carbon.

It's the same stuff that composes lowly coal, and it's the core of proud tree trunks. Carbon is the root of all life on Earth, and as its complex dance carries it through the biosphere, the Earth's state of health responds.

Listen to a Reporter Package in QuickTime:

Colors of Life Note to Editors

A Palette of Colors, A Planet Revealed - Page Three

Highlights from the Mar. 30 Science paper/Quickfacts about SeaWiFS

Other News about SeaWiFS 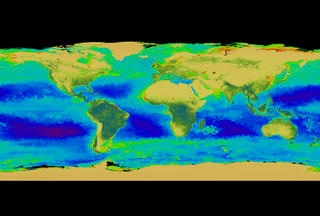 Until now, scientists have only had a continuous record of photosynthesis on land. But following three years of continual data collected by the SeaWiFS instrument, NASA has gathered the first record of photosynthetic productivity in the oceans. The process begins with a measurement of surface chlorophyll concentration.

Chlorophyll is the material that allows plant cells to convert sunlight into energy, thus enabling them to grow. It's a green substance, and thus a good indicator of overall plant health: robust forests and lush lawns and vibrant phytoplankton blooms appear green. By measuring chlorophyll concentration, scientists can determine the health and growth of plants in a given area. By extension, healthy color signatures indicate the successful use of carbon, the fundamental building block for life. In other words, lots of green indicates lots of chlorophyll; lots of chlorophyll implies healthy photosynthesis; strong photosynthesis indicates growth, and growth indicates successful use of carbon.

This release from the SeaWiFS research team marks the first continuous record of surface chlorophyll concentration in the ocean. The power of these three years of collected data can be summed up by a single word: continuity. By taking three years of continuous data as a whole, experts have been able to map trends and anomalies in the global circulation of carbon to a degree of detail than has never been done before. It is a baseline measurement to by which all future measurements will be compared. 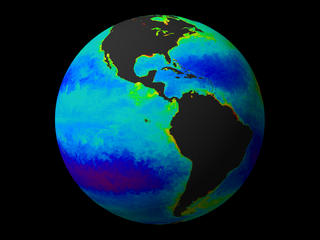 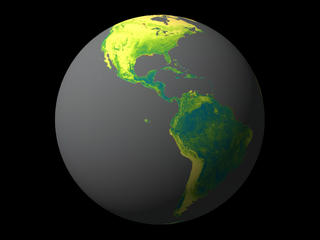 NASA designed SeaWiFS to study ocean processes. But the mission has surpassed its initial design goals. By carefully calibrating the sensor, experts have been able to use SeaWiFS data to monitor life on land, too.

In addition to the release of the first validated carbon cycle data, the project has noticed an increase in plant productivity on land in the past three years. This is interesting because supporting research shows that there hasn't been any atypically fast growth on land in that time. Scientists conclude that the increased productivity is tied to increased rainfall averages connected to the most recent El Nino phenomena.

As we consider a globe painted in the color-coded data gathered by SeaWiFS over the last three years, it's important to note the relative oxygen production of plant life in the ocean versus on land. While the ocean doesn't put out as much oxygen per square meter as vibrant rainforest, taken as a whole the ocean does produce roughly the same amount as the Earth's total land surface. This is due to the vastly larger area of ocean on the surface, essentially making up for the discrepancy in square meter productivity.

The ocean is not simply empty space filled with water and the occasional fish. It teems with life of myriad varieties, and pulses like a heartbeat with the changing seasons. That rhythm plays a fundamental role in regulating the health of all life on Earth. But while the familiar forms of stingrays and blue whales and kelp beds and sea urchins are the most easily recognizable, in terms of the biosphere, the action starts in a different population.

It's called phytoplankton. They're tiny, single celled plant organisms that form the root of the oceanic food chain. Little more than bits of greenish implications of life, immense and uncountable clouds of these plants appear like floating carbon signatures around the globe, offering evidence about the planet's health for those who can read the signs.

The word "phytoplankton" comes from the Greek. Phyto-, meaning "plant", and -plankton meaning "free floating". The most common species of phytoplankton is a tiny specimen called prochlorococcus. Each individual in a colony of prochlorococcus measures less than one micron across. In fact, it's largely due to the extremely small size of this humble life form that its existence wasn't even known until the middle of the 1980s. The same goes for a sibling species of phytoplankton called synococcus. Although less common than prochlorococcus and slightly larger, by itself it composes one of the most populous photosynthetic life forms on the Earth.

For years, researchers have only been able to study phytoplankton in discrete areas and synthesize a variety of suppositions about how it interacts with the natural world. But a global look at these humble plants has not been possible. Until now. 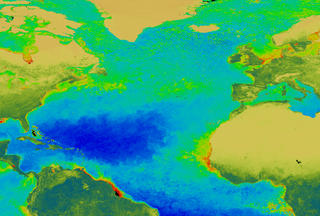 SPRING BLOOM in the NORTH ATLANTIC

The annual bloom of phytoplankton in the North Atlantic is one of the biggest regular blooms in the world. As seen here, the area covered by the bloom is larger than the territory covered by the Amazon rainforest in South America. In the open waters of North Atlantic, it's believed that lots of carbon initially taken up by phytoplankton ultimately settles to the ocean floor, as the region is not densely populated by zooplankyton, the next logical rung on the food chain. Although still inconclusive, studies of this area suggest strong evidentiary clues as to the process of carbon uptake and long duration carbon sequestration. 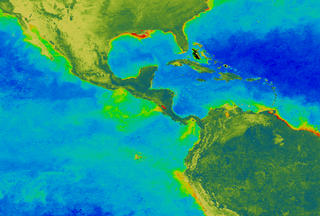 Along the West Coast of Central America we see extraordinary levels of phytoplankton growth, due largely to cold water upwellings along the eastern basin of the Pacific Ocean. This area rich in life supports a healthy and vibrant diversity of species, each with unique strategies for survival, but all ultimately dependent on the first link in the food chain. In human terms this has direct relevance to fishermen in the region, as the area is world famous for its significant tuna stocks. 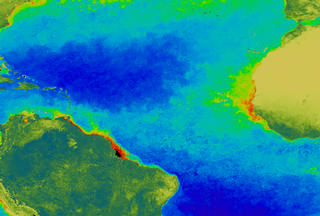 Deep ocean waters are not the only sources of nutrients for phytoplankton. The mouths of rivers often wash tons of nutrient rich water into the sea, providing abundant resources for all sorts of life.

Much of the nutrients that wash downstream are themselves functions of the carbon cycle as played out on land. Decomposing plant and animal matter that might have otherwise been sequestered on land can find their way into rivers and streams, feeding into the ocean.

South America presents two excellent examples of river outlets where phytoplankton tend to thrive. Along the northern part of the continent the mouth of the Orinoco River opens into the Caribbean. Along the Eastern side of South America, the mighty Amazon exits its thousand mile journey. At the end of each, notice the bright red tails waving against the largely blue-green background of surrounding Atlantic ocean. That's the signature of intense photosynthesis happening-billions of phytoplankton making their home in those currents, feeding off carbon saturated foodstuffs and turning sunlight into energy for life.

Also captured in this frame is a strong signal of phytoplankton growth coming off the western coast of Africa. 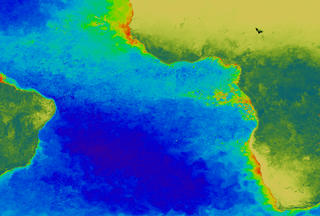 Along the western coast of Africa, intense phytoplankton blooms wave back and forth in Atlantic currents like fern fronds in a breeze. These gigantic fields of phytoplankton are the products of several factors, including coastal cold water upwellings and nutrient rich outflows from central African rivers. The middle parts of the African continent support extraordinarily dense networks of life, and the natural runoff from the region has a nourishing effect on life off shore. 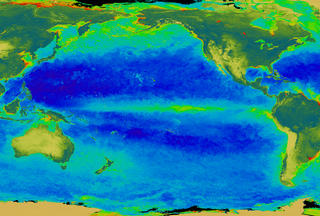 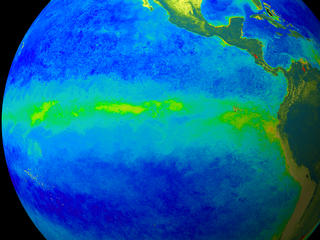 A SPLASH OF COLOR IN THE PACIFIC

The bloom associated with the 1997 to 1998 El Nino to La Nina transition event splashed across the Pacific Ocean like pigment thrown across empty canvas. Jetting from west to east, the explosive, yet short lived growth spurt there coincided with significant upwellings of cold water corresponding with the onset of La Nina. During the powerful 1997 El Nino event, SeaWiFS recorded little or no significant growth of phytoplankton in the equatorial Pacific.

Although this visualizations features an intense bloom in the Pacific, it's interesting to note that the El Nino/La Nina phenomena as its cause also contributed to simultaneous decreases in phytoplankton growth in the western Pacific and large increases in growth just east of Argentina.

Thinkquest: What is the Carbon Cycle