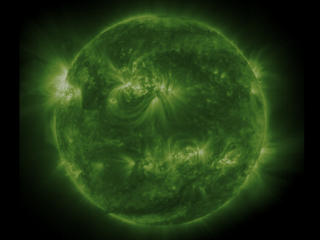 Winds of electrified gas rip through the solar atmosphere at nearly the speed of sound there, according to new observations from NASA's Transition Region and Coronal Explorer (TRACE) spacecraft and the European Space Agency/NASA Solar and Heliospheric Observatory (SOHO) spacecraft. 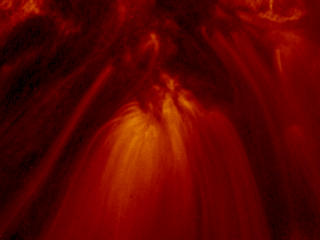 The new result, from a team of astronomers at the Harvard-Smithsonian Center for Astrophysics (CfA) in Cambridge, Mass., shows that the winds and storms of the solar atmosphere -- at speeds up to 200,000 miles per hour (about 320,000 kilometers/hour) -- are so intense that they are more important than gravity in determining the density of the atmosphere. The Sun's gravity at its visible surface is about 28 times stronger than that at the Earth's surface; a 150-pound (68-kilogram) person would face an epic struggle to support 4,200 pounds (1,900 kilograms) if he or she could somehow stand on the solar surface. For the Earth's atmosphere to behave similarly, winds over 3,000 mph (4,800 kph) would be common on the surface.

"This discovery completely changes our understanding of coronal loops, immense, arch-shaped structures of electrified gas that comprise the Sun's outer atmosphere (corona)," said Amy Winebarger, lead author of a paper on this research published in March in the Astrophysical Journal. "We are excited about this because it increases our understanding of the corona, which is the location of explosive solar activity that occasionally disrupts high-technology systems at Earth." Winebarger, formerly at CfA, is a solar physicist for Computational Physics Incorporated, Springfield, Va., and is now with the Naval Research Laboratory in Washington.

The solar atmosphere is permeated with magnetic fields, generated by electrified gas, or plasma, churning violently beneath the visible surface. Solar astronomers have long observed loops of plasma, called coronal loops, which appear to trace out the corona's complex magnetic-field structure, much as iron filings reveal the invisible magnetic field surrounding a magnet. Coronal loops come in various sizes, but most are enormous, capable of spanning several Earths.

Solar astronomers know the particles comprising plasma are electrically charged and feel magnetic forces. Thus, scientists thought coronal loops were tubes of plasma trapped by and enclosed in the arch-shaped magnetic fields of the corona.

The coronal loops have puzzling features, however. The strong pull of solar gravity led astronomers to believe that the plasma should be dense at the bases of the loop and thin at the top, just as the Earth's gravity pulls our atmosphere close to the surface, causing it to thin with increasing altitude. In fact, coronal loops seem to be about the same density throughout their height, even though some of them extend several hundred thousand miles (over a million kilometers) above the solar surface.


In their new observation, the astronomers saw bright blobs of plasma racing up and down the coronal loops in movies made from TRACE images. SOHO data confirmed that these plasma blobs were moving at tremendous speeds, leading the researchers to their new view that coronal loops are not static plasma-filled structures, but rather hypervelocity currents of plasma blasted from the solar surface and squirted between the magnetic structures in the corona.

"Rather than being tubes of plasma enclosed within a magnetic container, they are jets of hot plasma flowing along in the alleys between the strong coronal magnetic fields," said Leon Golub of CfA, a co-author of the paper. If coronal loops are indeed currents of plasma being propelled against solar gravity, they would have about the same density along their entire height, just like the arc of water from a water fountain.

The researchers observe plasma flows in approximately half of all coronal loops visible by TRACE. Flows may be present in the remainder, but they might be too faint for TRACE to detect, according to the team. New instruments will be required to determine if all coronal loops have high-speed flows, because some loops are too small, or are of a different temperature than what TRACE can see.

According to the researchers, the plasma current that forms a coronal loop is probably caused by uneven heating at the bases of the loop, with plasma racing from the hotter end to the cooler end. "The bases of a coronal loop are separated by many thousands of miles, and there is no reason to assume that the environment at one end will be exactly the same, and input exactly the same amount of heat, as the environment at the other end," said Golub.

The researchers aren't sure what causes coronal-loop heating in the first place, but their work may help discover the mechanism, shedding light on the long-standing mystery of why the corona is hundreds of times hotter than the solar surface. "There are many theories to explain coronal heating, but only a few of them can produce the hypervelocity plasma flows we see in coronal loops, so this discovery narrows the possibilities greatly," said Winebarger.

This movie begins with a full-disk view of the Sun from the Solar and Heliospheric Observatory (SOHO) spacecraft. The image is in false color, and coronal loops extend in all directions from the Sun's surface, making it look like a fuzzy ball. The second part of the movie uses images from the TRACE spacecraft to zoom in close to a group of coronal loops near the center of the solar disk. This sequence is also in false color, and electrified gas streams along the loops (especially the ones directed towards the bottom left of the image), giving them the appearance of a fountain. This is evidence for the idea that coronal loops are currents of electrified gas being propelled against solar gravity.

CREDIT: NASA and the SOHO/TRACE teams

More dramatic pictures of coronal loops from the TRACE spacecraft. These false color images are made using the ultraviolet light emitted by hot, electrified gas in the coronal loops. Coronal loops come in a variety of shapes and sizes, but most are enormous, capable of spanning several Earth's.

CREDIT: NASA and the TRACE team

Coronal loops expand from the surface of the Sun following a solar explosion (solar flare) on April 21, 2002 in this movie from the TRACE spacecraft. The flare was designated as "X" class by the National Oceanic and Atmospheric Administration (NOAA). X-class flares are the most powerful -- some release as much energy as a billion megatons of TNT.

CREDIT: NASA and the TRACE team