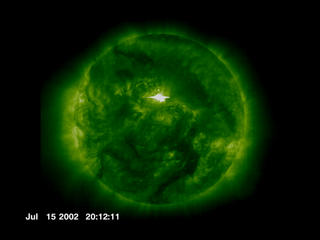 While Tiger Woods was trying to claim the top four golf tournaments, the Sun delivered a grand slam of its own, blasting four of its most powerful class of solar flares in just eight days.

Solar flares are tremendous explosions in the atmosphere of the Sun, with the most powerful class, called the X class, capable of releasing as much energy as a billion megatons of TNT. Flares are closely watched by solar astronomers because they can disrupt high-technology systems, but the Solar and Heliospheric Observatory (SOHO) spacecraft gave a preview of the stormy solar weather while it was still rumbling on the far side of the Sun, the side opposite the Earth. 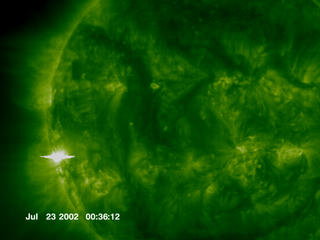 Movie with close-up of Solar Flares

The flares came from sites of violent activity on the Sun, called active regions. Active region (AR) 10030 blazed with an X 3.0 flare on July 15, and an X 1.8 flare July 18. On July 20, AR 10036 blasted an X 3.3 flare, and an X 4.8 flare, the most potent of the series, exploded July 23 from AR 10039. These active regions were all associated with sunspots, planet-sized dark areas on the solar surface caused by an intense concentration of magnetic fields.

Active regions are much larger than the Earth and consist of strong magnetic fields on the Sun's surface. Active regions produce flares and eruptions of plasma (hot, electrically charged gas), called coronal mass ejections (CMEs). The radiation and plasma from these events sweep past the Earth, sometimes affecting spacecraft electronics and terrestrial power systems, and disrupting radio communications. Understanding and forecasting solar eruptions and their consequences is a relatively new science called space weather.

Now space weather experts watch the Sun more closely than ever, because modern systems are much more vulnerable to solar disturbances than old technology. The experts can still be taken by surprise because the Sun rotates, bringing the effects of hidden active regions to bear on Earth.

However, scientists using SOHO had advance warning that stormy weather was brewing on the Sun. "Activity from active region 10039 was 'expected,' based on a series of strong, far-side halo coronal mass ejections during the last week and far-side observations by the SOHO Michelson Doppler Imager (MDI)," said Dr. Joe Gurman, the U.S. Project Scientist for SOHO at NASA's Goddard Space Flight Center in Greenbelt, Md.

"It adds some fun to see things coming," said Dr. Philip Scherrer, Principal Investigator for MDI at Stanford University. Scherrer sent an email to Gurman warning of the imminent appearance of AR 10039.

SOHO orbits a special point in space one million miles from Earth in line with the Sun, so it can't see the far side of the Sun directly. However, the MDI instrument can form an image of far-side active regions by analyzing ripples on the Sun's surface. Sound waves reverberating through the Sun generate the ripples, which are analyzed by computer to form an image of the far side and the solar interior. Analysis of solar sound waves is the science of helioseismology, and it opened the Sun's gaseous interior to investigation in much the same way as seismologists learned to explore the Earth's rocky interior with earthquake waves.

"Halo" CMEs are named because of their appearance in another SOHO instrument, the Large Angle and Spectrometric Coronagraph (LASCO). A halo CME resembles a faint, white ring that expands in LASCO's field of view as the ejected plasma cloud moves away from the Sun. Astronomers pay close attention to halo CMEs because they can be on a collision course for Earth. Since these were from active regions on the far side of the Sun, they were heading in the opposite direction and posed no threat. However, they were useful as harbingers of the angry active regions about to rotate into our view.

SOHO is a cooperative project between the European Space Agency (ESA) and NASA. The spacecraft was built in Europe for ESA and equipped with instruments by teams of scientists in Europe and the USA.