Black Carbon Contributes to Droughts and Floods in China -

A new NASA climate study has found that large amounts of black carbon (soot) particles and other pollutants are causing changes in precipitation and temperatures over China and may be at least partially responsible for the tendency toward increased floods and droughts in those regions over the last several decades.

In a paper appearing in the September 27 issue of SCIENCE, Surabi Menon of NASA and Columbia University, and her colleague, James Hansen of NASA's Goddard Institute for Space Studies, New York, indicate that black carbon can affect regional climate by absorbing sunlight, heating the air and thereby altering large scale atmospheric circulation and the hydrologic cycle.

Using the NASA Goddard Institute for Space Studies climate computer model, and aerosol data from 46 ground stations in China, Menon and Hansen conducted four sets of computer simulations to monitor the effects of black carbon on the hydrologic cycle over China and India. The aerosol data from the Chinese ground stations were provided by Yunfeng Luo, a co-author on the study from the Institute of Atmospheric Physics, Chinese Academy of Sciences.

In the four numerical simulations, Menon and Hansen isolated specific factors such as sea surface temperature, other greenhouse gases, and aerosols and analyzed whether changes in those factors would be responsible for hydrologic cycle changes.

Out of the four scenarios, the effect of increased amounts of soot (over southern China) created a clear tendency toward the flooding scenario that has been occurring in southern China and the increasing drought over northern China that has persisted over the last several years.

"If our interpretation is correct, then reducing the amount of black carbon or soot may help diminish the intensity of floods in the south and droughts in the northern areas of China, in addition to having human health benefits," Hansen said. Currently research is being conducted to verify a similar pattern over India.

Black carbon or soot is generated from industrial pollution, traffic, outdoor fires, and household burning of coal and biomass fuels. Soot is a product of incomplete combustion especially of coal, diesel fuels, biofuels and outdoor biomass burning. Emissions are large in China and India because cooking and heating are done with wood, field residue, cow dung, and coal, at a low temperature that does not allow for complete combustion. These resulting soot particles absorb sunlight, just as dark pavement becomes hotter than light pavement in the summertime.

When soot absorbs sunlight it heats the air and reduces the amount of sunlight reaching the ground. The heated air makes the atmosphere more unstable, creating rising air (convection) which forms clouds and brings rainfall to regions that are heavily polluted. (See Image 5)

The increase of rising air in southern China is balanced by an increase of sinking air (subsidence) and drying in northern China. When air sinks, clouds and thus, rain, cannot form, creating dry conditions. For example, deserts are places where subsidence occurs.

In recent years, northern China has suffered from an increased severity of dust storms, while southern China has had increased rainfall that is thought to be the largest change in precipitation trends since the year 950. Menon and Hansen believe that human-made sunlight-absorbing aerosols may be responsible.

Soot blocks the Sun's energy from reaching the ground and cools the surface. This image, derived from the GISS climate computer model, and aerosol data from 46 ground stations in China, shows black carbon's effect in lowering surface temperatures during the summer months (June, July and August). Cooler temperatures are denoted by the blue colorations. This map shows cooling of 0.5 to 1.0 degrees Celsius (.9-1.8 degrees Fahrenheit) occurring over China, and warming temperatures throughout the rest of the world (in yellow). As soot heats the lower atmosphere over China some of this warm air can get transported to the other regions of the world and can cause surface warming in distant locations. 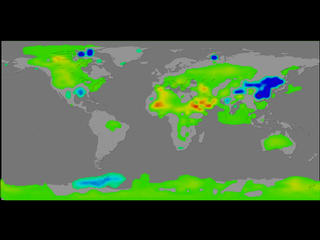 Image 6 Click on Asia to see a close up of the region. Click on North/South America to enlarge this image.

This image, derived from the GISS climate computer model, and aerosol data from 46 ground stations in China, shows how black carbon can change rainfall patterns over the northern and southern regions of China during the summer months of June, July and August. The blue colors indicate regions in which the simulations yield a tendency for increased rainfall by as much as 10 inches over the summer. Other regions (brown colors) have decreased rainfall by as much as several inches or more. Ground station aerosol data was provided by co-author Dr. Y. Luo of the National Science Foundation of China, Haidian, China.. 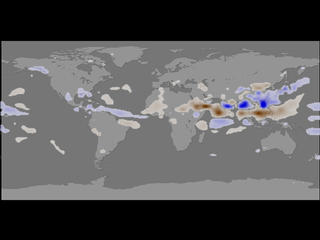 Image 7 Click on Asia to see a close up of the region. Click on North/South America to enlarge this image.

Soot can block the Sun's energy from the ground and reduce crop yields. This image, derived from the NASA Goddard Institute for Space Studies (GISS) climate computer model, and aerosol data from 46 ground stations in China, shows the decrease in solar energy reaching the ground (in black) during the summer months (June, July and August). Yellow shows were the sunlight has increased. 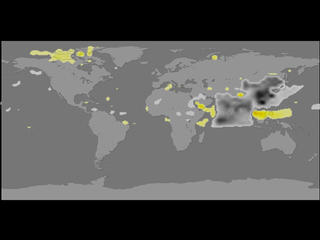 Click on Asia to see a close up of the region. Click on North/South America to enlarge this image.

PUTTING IT ALL TOGETHER

This animation takes a closer look at Asia and cycles through the maps showing how black carbon can change ground temperatures, rainfall and sunlight over China and India.

Image 9 Click on image to see an animation of all three maps and how they relate.