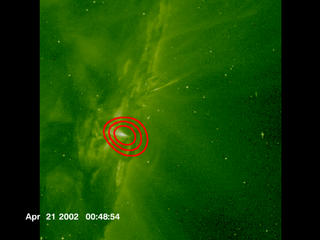 These and other initial results from the Ramaty High Energy Solar Spectroscopic Imager (RHESSI) will be reported today by scientists from the University of California at Berkeley, NASA's Goddard Space Flight Center, and other institutions at the annual meeting of the American Astronomical Society in Albuquerque. 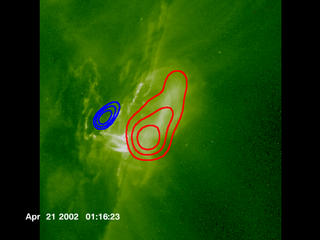 On April 21, 2002, a spectacular X-class (extremely large) solar flare exploded on the western limb of the Sun and was captured by RHESSI and the Transition Region and Coronal Explorer (TRACE) spacecraft, as well as many other spacecraft and ground-based observatories. The combined RHESSI and TRACE data yield beautiful time-lapse movies, and reveal important new physics.

"By combining RHESSI hard X-ray images with TRACE EUV data, we are able to follow the cascade of energy in the largest explosions in the solar system," says UC Berkeley professor Robert Lin, principal investigator of the RHESSI mission. "We can determine exactly where and when energy is released in the solar atmosphere, and identify its form: plasma heated to tens of millions of degrees, and fast-moving electrons that stream from high in the corona to impact and heat the gases below."

RHESSI observations show that just before a flaring region fills with hot gas (seen by TRACE at about 2 million degrees C, or 3.6 million degrees F), it emits hard X-rays associated with fast-moving electrons. The initial bursts are of ~20-keV photons, similar to those used in medical X-rays. Even higher energy ~100-keV bursts reveal where energy is deposited by the electrons before spreading throughout the flare region.

The X-rays from the base of the active region are "bremsstrahlung", or "braking radiation," caused by electrons slamming into the dense gases at the bottom of the corona. The electrons are thought to be accelerated by the collapse of stretched magnetic field lines high above the solar surface ("magnetic reconnection"). The impacts also heat the gas, which fills structures in the changing local magnetic field to yield the spectacular patterns seen with TRACE, and emits its own thermal X-rays as well.

"We were surprised to see the X-rays coming from the base of the flaring region well before the initial brightening in the EUV," says Brian Dennis, RHESSI mission scientist at NASA's Goddard Space Flight Center. "We expected to see X-rays coming nearly simultaneously with the EUV brightening."

RHESSI also reveals that solar active regions, the strongly magnetized sources of solar flares and coronal mass ejections, constantly produce a multitude of tiny X-ray flashes, or "microflares," that last only a few minutes each. "RHESSI is the first solar X-ray instrument with such high sensitivity in this energy range," says Lin. "While large solar flares are the brightest sources of X-rays, we can now see that active regions crackle and sputter with miniature flares all the time."

The team has not yet performed a full analysis of the small X-ray flashes -- but there is strong evidence that microflares with particle acceleration occur all the time in the active corona. That's important because it could help explain the 60-year-old mystery of how the active corona is heated to its observed temperature of more than 200 times hotter than the surface of the Sun.

RHESSI uses a unique shadow-mask technique to generate images with X-rays so energetic that no known broadband optics will focus them. RHESSI uses nine pairs of special tungsten grids, with slits as fine as a human hair, at opposite ends of a 1.5-meter-long (5 foot) tube. Only X-rays from specific directions can pass through each grid pair to enter an energy-resolving detector. The spacecraft rotates at 15 RPM to change the directions of admitted X-rays. Computers on the ground analyze the cyclical changes in X-ray throughput to each detector, and reconstruct images from them.

Making sharp images requires very precise knowledge of the grids' alignment, and ongoing in-flight calibration will continue to improve even these early images as the mission progresses. Ultimately, images with 2 arc second resolution will be possible. (That's equivalent to the width of a human thumb at a distance of a mile).

Dennis explains, "We start with simple shadow patterns and reconstruct images that have resolution equivalent to any telescope on the ground, but in gamma rays and hard X-rays rather than visible light. No-one has been able to do that before."

Caption for Images/Animations 1 and 2: X-RAY OF A SOLAR FLARE

A burst of "hard" (high energy) X rays (red) near the solar surface leads the flare and is caused by electrons shooting down the magnetic field and smashing into the solar surface. Even "harder" X-rays and gamma rays (blue) follow the initial stages. The result is surprising because the X-rays are emitted well before the ultraviolet part of the flare.

RHESSI detects X-rays that are similar to those used in medical and dental X-rays on Earth. Because it is impossible to focus hard X-rays, a computer on the ground assembles telescopic images from the shadows cast by a special set of metal grids. As in-flight calibration continues to improve, the RHESSI images such as these will become far sharper, ultimately showing almost as much detail as the UV images in this movie.

The RHESSI spacecraft watches the Sun in X-rays and gamma rays. Launched in Feb. 2002, its primary objective is to study the secrets of how solar flares are produced in the Sun's atmosphere.

Caption for Image/Animation 5: RHESSI in orbit.