Scientists and engineers call it "first light"-the first images from a newly activated spacecraft. This week NASA and its international partners are releasing first light images from one of the six advanced instruments aboard the recently launched Aqua satellite. The powerful Aqua Earth observing platform is designed to look at interrelated geophysical properties of our home planet, with a particular emphasis on water.

While most first light pictures fall into a category known as engineering images, one of the instruments onboard has already enabled researchers to create an early scientific product. Using the AMSR-E (Advanced Microwave Scanning Radiometer for the Earth Observing System) instrument, Aqua researchers have created a striking picture of the world's sea surface temperatures, an important characteristic in monitoring the status and changing conditions of our planet. The National Space Development Agency of Japan (NASDA) manages the AMSR-E instrument. 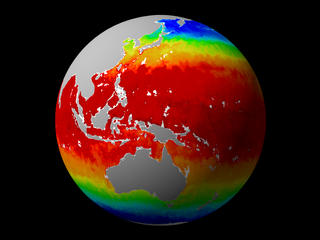 The clouds have parted. That's the message from the NASA Goddard Space Flight Center, where this week scientists are releasing so-called "first light" images from their newly launched Aqua spacecraft. Why no clouds? Data gathered from one of the advanced Earth observing sensors onboard has delivered an impressive picture of the entire planet's sea surface temperature. Until now, few space based systems could resolve ocean temperature through clouds, often forcing experts to undertake complicated stitching techniques to get global pictures. Sea surface temperature is an important indicator for many complex geophysical processes. 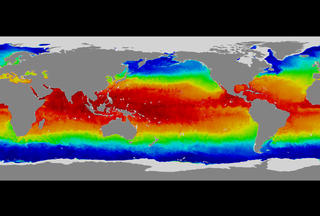 NASA announces a significant milestone on its journey to a new understanding of the Earth. So-called "first light" images from its newly launched Aqua spacecraft show dramatic maps of the Earth's sea surface temperature measured to a high degree of accuracy, collected world wide regardless of cloud cover. Sea surface temperature is an important indicator for many complex geophysical processes. This is the first of what the space agency believes will be many important images delivered from the suite of six advanced scientific instruments flying onboard. The data for this scene come from an instrument called AMSR-E. 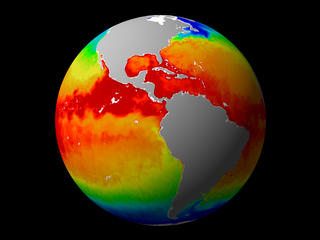 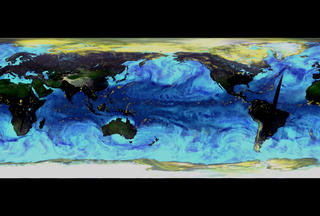 The second image shows a "pseudo" color image, generated from microwave emissions from the surface and atmosphere.

The water cycle propels the Earth's climate. Not only is water vapor the most important greenhouse gas, but water's circulation through the Earth's many parts also distributes energy. The water cycle is an extremely complex process, and a better understanding of its subtleties can provide valuable information to scientists. One of the key instruments on the Aqua satellite to explore these questions and more is AMSR-E. 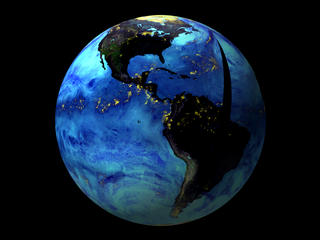 AMSR-E: LOOKING AT WATER FROM SPACE

Several of the instruments onboard the Aqua spacecraft have enabled scientists to generate early engineering pictures, but data from the Advanced Microwave Scanning Radiometer for the Earth Observing System (AMSR-E) have already yielded a geophysical product. The powerful device helmed by a spinning golden disk has facilitated a nearly global picture of the Earth's sea surface temperatures.

This is the first of what researchers are expecting to be many important capabilities that the instrument will make possible. By collecting reflected radiation in the microwave range of the spectrum, scientists will use AMSR-E to study precipitation, near-surface wind speeds, sea surface temperature, soil moisture, snow cover, and more.

Compared to the other instruments onboard Aqua, AMSR-E is distinctive for its appearance. Rising like a golden sail above the bow of the vehicle, the instrument spins 40 times a minute. It will gather data from an 867-mile (1445 km) swath of the planet as it orbits.

Aqua's assets include a suite of six highly advanced instruments, designed to study the Earth in terms of its systemic interactions. As the name of the spacecraft suggests, the principal goals of the mission concern a better understanding of the planet's water cycle, but Aqua will also provide important tools for researchers studying other topics, too.

The satellite will make measurements of the Earth many times a day, but it will cross the equator at the same local time, every orbit. This is because it will orbit the planet on a nearly polar route, passing over different points on the ground at approximately 1:30 pm and 1:30 am. By maintaining a consistent time for taking readings, the integrated suite of sensors on Aqua will facilitate sophisticated measurements of planetary processes that until now have been challenging to collect and calibrate. Working in concert or independently, Aqua's scientific hardware will be used to study climate change, vegetation, water vapor in the atmosphere, clouds, precipitation, soil moisture, sea ice, land ice, snow cover and more.

It's a broadly defined mission overall, specifically composed of both narrowly and widely tailored objectives. The processes targeted for study directly affect life on Earth; they describe the tangible world: rainfall that waters crops, snow and ice that reflect heat back into space, and changes in vegetation that describe how our planet's biosphere may be shifting due to human induced climate pressures.

COLORS IN THE AFTERNOON

The sun rose on a new scientific era the morning of May 4, 2002. At 2:55 a.m. in the pre-dawn darkness, the Aqua satellite blasted off from Vandenberg Air Force Base in California. Flying at an altitude of 438 miles (705 km), the vehicle carries six advanced instruments designed to study various Earth processes. As part of the mission design, these instruments are specifically tailored to work together as well as separately--in essence embodying the philosophy that if the Earth's processes function in systemic, interrelated ways, the best way to study the planet is with sensors that can correlate their findings.

In fact, this strategy goes beyond the bounds of the Aqua platform alone. As only the latest launch in a series of Earth observing vehicles, Aqua's instrumentation and data collection efforts are all part of a larger effort to study the Earth in systemic terms.

Satellite designers built Aqua to function on orbit for a minimum of six years. This high-tech, space-based research observatory is a sibling to another vehicle called Terra, an Earth science satellite launched in December 1999 and another satellite called Aura slated for launch later in the decade.

AN ENTERPRISE, AN ADVENTURE

Aqua is just one component of NASA's growing Earth Observing System, an integrated fleet of satellites and data collection procedures designed to study the Earth in terms of conjoined, interdependent processes.

Space offers a useful and powerful perspective for gathering information about natural and human-induced change around the world. It's not feasible to study changes in the oceans, the atmosphere, or life on Earth in global terms without looking back at the Earth from space.

The Earth Observing System, or EOS, is part of NASA's Earth Science Enterprise, dedicated to better understanding and protecting our home planet.ESE continues to develop new technologies and applications aimed at managing natural hazards, civil planning, natural resource management, and much more. In the near term, the program has set its sights on a better understanding of global climate change. But in the long term, this evolving and exciting way of studying how the living Earth works offers great advances in a number of important fields.