Visualizations by Alex Kekesi Released on September 27, 2016
Download Options
This visualization begins with an overview of the United States showing the clouds and rainfall accumulation of the massive rain event over Louisiana beginning on August 11th, 2016 through August 13th, 2016. The camera then begins to zoom in as time resets to August 11th. Time then slows way down on August 12th to show the first of GPM's passes. In this close up of GPM's volumetric DPR data over Louisiana, a cutting plane materializes into view to show the inner structure of this giant storm system. From this view, one can clearly see the heavy amounts of rain in the center of the storm (depicted in yellow, orange, and red). The GPM data then dissolves away as time speeds up before slowing down again later on that same day. This time GPM captures a much larger swath of the storm. Dissolving in the cutting plane again reveals huge amounts of rainfall at this later time. As the GPM data dissolves away again, time speeds back up to show the rest of the rainfall accumulation partway through August 13. At this time, a large portion of Louisiana can be seen completely saturated with rainfall accumulations (depicted in shades of orange to red).

Download Options
Color bar of rainfall accumulation in millimeters. Colors in black are little to no rain. Colors then range from blue to cyan to green, yellow, orange, and finally red (where red is the highest value.) 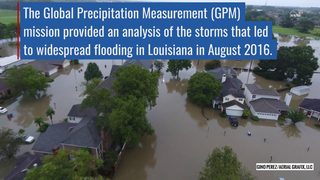 GPM Provides a Closer Look at the Louisiana Floods 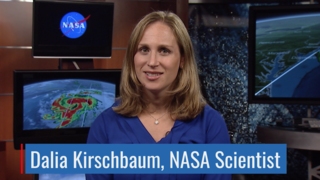 Observed Data - JAXA - 8/12/2016 2:20Z and 12:21Z
Credit:
Data provided by the joint NASA/JAXA GPM mission.
view all stories where this data set is used
Note: While we identify the data sets used in these visualizations, we do not store any further details nor the data sets themselves on our site.

This item is part of these series:
GPM Animations
Floods
Flooding

GPM Provides a Closer Look at the Louisiana Floods